Construction of CTA Telescopes in Ondřejov 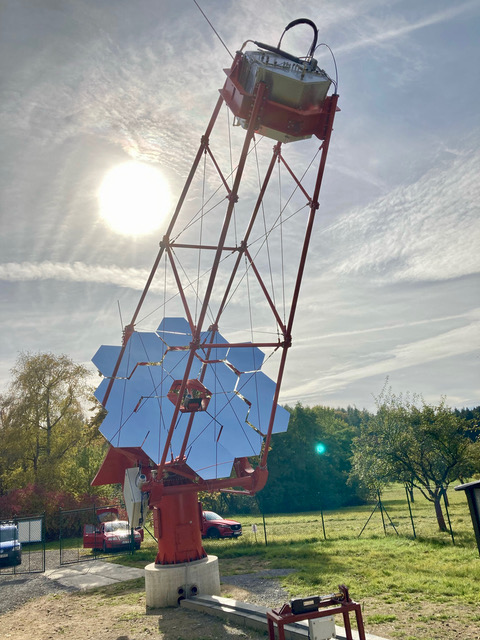 On October 19, 2021, an informal meeting of MEYS CR representatives lead by dr. Marek Vyšinka (research and development section of MEYS) with investigators of infrastrutural projects EU.ARC (ALMA), EST-CZ, and CTA-CZ took place at the observatory in Ondřejov. Members of the project teams presented the current status of the infrastructures and a conclusion and links to other activities of the Astronomical Institute of CAS has been presented by the director of the institute prof. RNDr. Vladimír Karas, DrSc.

The status of the CTA-CZ infrastructure, where the Joint Laboratory of Optics is heavily involved, has been summed up by the principal investigator of the project prof. RNDr. Miroslav Hrabovský, DrSc.: "As of the end of September, the installation of the first of two planned Cherenkov telescopes SST-1M has been completed at the site of the Astronomical Institute in Ondřejov. The telescopes have been developed within the CTA collaboration (Cherenkov Telescope Array) that will build large future observatories at La Palma and in Chile. Even though SST-1M is not a traditional astronomical telescope, we can say that with its four-meters diameter it is currently the largest optical telescope installed in the Czech Republic. The telescope is not suitable for astronomical imaging, but it is designed to detect high-energy gamma photons. These photons originate in the most energetic sources in the Universe and their detection makes it possible to study exotic processes that take place in such sources."

The development and realization of the telescopes is a result of cooperation of scientists from several European institutions such as the Institute of Physics CAS, Astronomical Institute CAS, Palacký University in Olomouc, University of Geneva and the Institute of Nuclear Physics PAN. "The installation of the second telescope will be commenced at the beginning of November, so we hope that we will be able to start testing operation at the beginning of the next year and we look forward to the first scientific results that will verify the functioning of these unique telescopes," adds prof. Hrabovský.