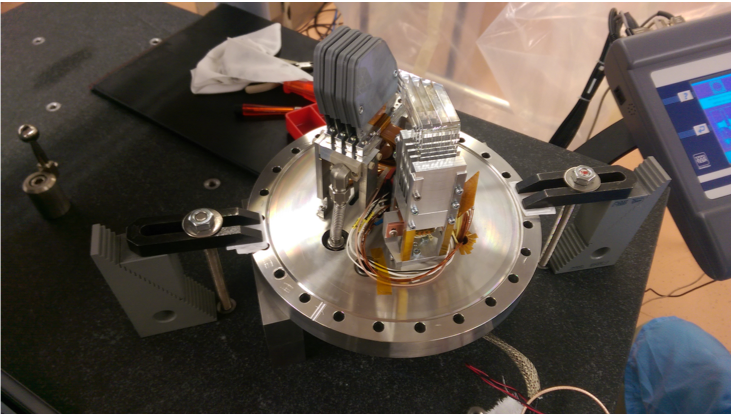 The particle physics group at JLO is mainly bound to the CERN-ATLAS experiment at the LHC accelerator at CERN. While in the past JLO contributed to the CERN facilities with several deliveries of optical technologies, today the the involvement is of a more profound nature.

First, the group is heavily involved in the development of a time-of-flight detector, primarily, but not only for the ATLAS Forward Proton (AFP) detector. The group intends to use its knowledge of optical technologies to develop a radiation-resistant time-of-flight (ToF) detector with high time resolution (~10-20 ps), which will allow to study pulse generated signals over a very noisy background. Such detector can be implemented in a wide variety of industrial or medical applications (LIDAR, diagnostic devices), but also in detection devices for particle physics. New configurations (optical, electronic and mechanical) of the ToF detector with the resolution of tens of picoseconds or better will are being proposed and studied in detail, also using computer simulations in Geant4. Detector parameters are measured and optimized to obtain the best possible time and also space resolution, and the radiation resistance of the detector will be verified in order to allow use in the environment of the high-energy physics experiments - ATLAS detector (CERN) and MPD detector at NICA (JINR). Proposed upgrade of the CERN-ATLAS detector (ATLAS Forward Proton, AFP) will also allow searches for signs of new physics beyond the standard model (BSM) of the elementary particles. Picosecond timing resolution will allow to suppress the background that will naturally increase with the planned increase of the LHC luminosity that should allow measurement of these extremely rare events. High time resolution will be achieved by carefully designed optical part and cutting-edge electronics developed within CERN-ATLAS collaboration (especially University of Alberta, Stony Brook University NY, University of Texas at Arlington). Closely related to the time-of-flight detector is the work of our team members on the data analysis of diffraction processes at the LHC, where one or both protons remain intact after the collision while part of their energy can be transferred to a production of particles in the acceptance of the central ATLAS detector. These events probe non-perturbative quantum chromodynamics and various diffraction models and are an important ground for BSM searches.

Another part of the group is involved in the analysis of the LHC data related to the heaviest member of the quark family - the top quark. Recently, the main attention is focused on measurement of the differential cross-section of the top quark at the energy of 13 TeV as well as to the search for the top quark pair production in proton-lead collisions delivered by the LHC in dedicated runs. Top quark is an important signal probing predictions of the perturbative quantum chromodynamics at different levels of precision, with measured data constraining models parameters to simulate this often important background for other BSM searches.

The group takes part in the ATLAS upgrade of the Inner Tracker (ITk) detector, namely the silicon strip detector during test beam campaigns and data analysis and simulation. The group has also been involved in the calibration of hadronic final states (jets) in the ATLAS detector and studies the statistical, analysis and reconstruction techniques using standalone privately simulated samples. The group further plans to contribute to analysis prospects for the planned Future Circular Collider (FCC). Recently, the group has started to increasingly contribute also to the analyses and simulations related to projects CTA and FAST.